Trenton, NJ – The New Jersey Utilities Association (NJUA) has awarded the utility industry’s highest honor, the NJUA Distinguished Service Award, to Robert J. Iacullo for his leadership and accomplishments on behalf of New Jersey’s investor-owned utilities. The award was presented during the Association’s 101st Annual Conference at Harrah’s Resort in Atlantic City. 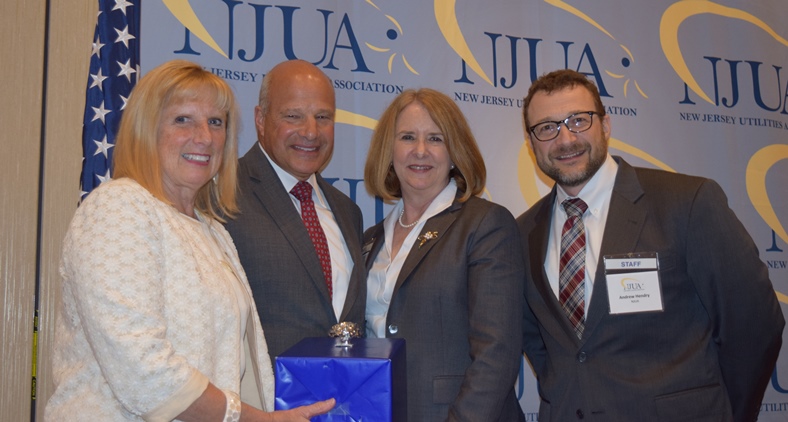 A veteran of the utility industry, Iacullo retired in 2016 after 36 years with SUEZ North America where he most recently served as executive vice president, overseeing the support services of environmental compliance, health and safety, operations support, corporate communications, regulatory relations and external affairs for SUEZ North America’s water and wastewater businesses across the nation. In this capacity, he had overall responsibility for supporting the company’s utility and environmental services business lines.

Prior to joining the company, Iacullo served as rate analyst with the New Jersey Board of Public Utilities.

“Bob was a dedicated NJUA board member for many years. His commitment and leadership has not gone unnoticed, and we are proud to be able to present him with such an honor,” said Andrew Hendry, president and chief executive officer of NJUA.

Additionally, Iacullo was a founding member of Choose New Jersey, Governor Christie’s vehicle for maintaining and building a better business climate in New Jersey.  He served as a member of the board of directors of the National Association of Water Companies, including as president in 2007, as well as the U.S. Water Alliance and NJUA.

“Bob Iacullo exemplifies the qualities this service award embodies. His professionalism is outstanding, and he continues to make a positive impact on the industry,” said Mary Patricia Keefe, chairperson of NJUA’s board of directors and vice president of regulatory affairs and business support for Elizabethtown Gas.

As the 28th recipient of the NJUA Distinguished Service Award, Iacullo joins the ranks of past recipients who include, among others, former Board of Public Utilities commissioners, including Governor Brendan Byrne, utility company executives, attorneys and others who have made significant contributions to the industry.

Iacullo continues to serves on the board of the Bergen County (NJ) United Way and is a commissioner of the New Jersey Water Supply Authority. He is a trustee of Montclair State University and a member of the University’s Business Advisory Board, where he works with past NJUA recipient Dennis Bone.

Iacullo earned a bachelor’s degree in business administration from Montclair State University and a master’s degree in finance from Fairleigh Dickinson University.