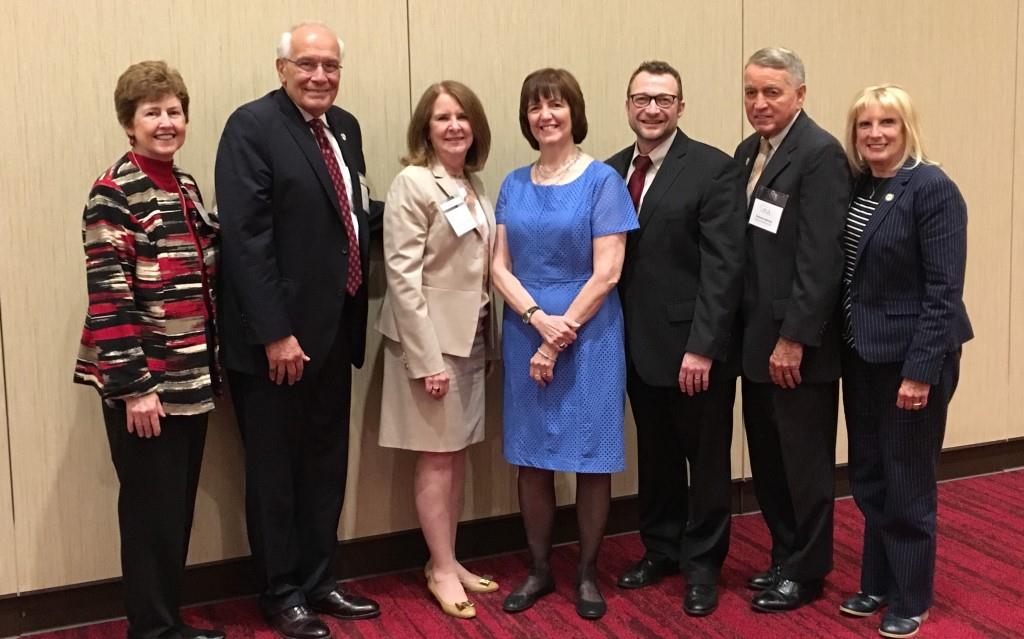 Trenton, NJ – The New Jersey Utilities Association (NJUA) has awarded the utility industry’s highest honor, the NJUA Distinguished Service Award, to the Honorable Jeanne M. Fox for her highly accomplished and influential career in the regulated utility industry. The award was presented during the Association’s 102nd Annual Conference at Harrah’s Resort in Atlantic City.

Fox is a former commissioner of the New Jersey Board of Public Utilities (NJBPU) and served as its president and a member of the Governor’s cabinet for eight years. Highly regarded in the utility industry due to her wealth of knowledge and expertise, Fox is one of the only individuals in the history of the NJBPU to start as a staffer and ultimately be appointed as a commissioner.

“Commissioner Fox has had an enormous impact on the utility industry. Her leadership, dedication, knowledge and passion for shaping energy policy is unmatched, making her an obvious choice for this award,” said Andrew Hendry, president and chief executive officer of NJUA.

Fox started at the NJBPU as a regulatory officer in 1981 and was quickly promoted to positions of increasing responsibility, including Solid Waste Division Deputy Director, Water Deputy Director and Chief of Staff. She also served as Regional Administrator of the United States Environmental Protection Agency Region 2 and as Commissioner and Deputy Commissioner of the New Jersey Department of Environmental Protection and Energy.  Additionally, Fox has served as an adjunct professor at the Woodrow Wilson School at Princeton University, Rutgers University and the school of International and Public Affairs at Columbia University.

While serving as on the NJBPU, Fox was actively involved the National Association of Regulatory Utility Commissioners (NARUC). She was a member of Board of Directors for 11 years and also served on the Sub-Committee on Education and Research, Committee on Energy Resources and Environment and Committee on Critical Infrastructure. She is currently a member of NARUC’s Commissioners Emeritus.

Fox also served as president and vice president of the Mid-Atlantic Conference of Regulatory Utilities Commissioners (MACRUC) and was instrumental in countless other organizations, including the National Leadership Group on Energy Efficiency; U.S. Department of Energy’s Electricity Advisory Committee; National Council on Electricity Policy; the Harvard Electricity Policy Group; the National Petroleum Council (NPC); and the Regional Greenhouse Gas Initiative (RGGI) Board, among many others.

Fox continues to be a tireless volunteer and hold leadership roles in various organizations supporting education, energy policy and other causes. She is a member of The National Academies of Science Panel on Transmission and Distribution Resiliency; the Carnegie Mellon University’s Advisory Board for the Center for Climate Energy Decision Making: GRID Alternatives Tri-State Board of Directors; Rutgers University Trustee Emerita; Associate Alumnae of Douglass College President; Women’s Political Caucus of NJ Board; New Jersey AARP’s Executive Council; and Girl Scouts of Central and Southern NJ Board Development Committee.

“I have had the pleasure to know and work with Jeanne Fox countless times during her career in the industry. She exemplifies the qualities this award represents. Her work has shaped New Jersey’s energy policy, and it will continue to have an impact for years to come,” said Mary Patricia Keefe, chairperson of NJUA’s board of directors and vice president of external affairs and business support for Elizabethtown Gas.

As the 29th recipient of the NJUA Distinguished Service Award, Fox joins the ranks of past recipients who include former Board of Public Utilities commissioners, including Governor Brendan Byrne, utility company executives, attorneys and others who have made significant contributions to the industry.